The Puzzling Rise in Nearsighted Children 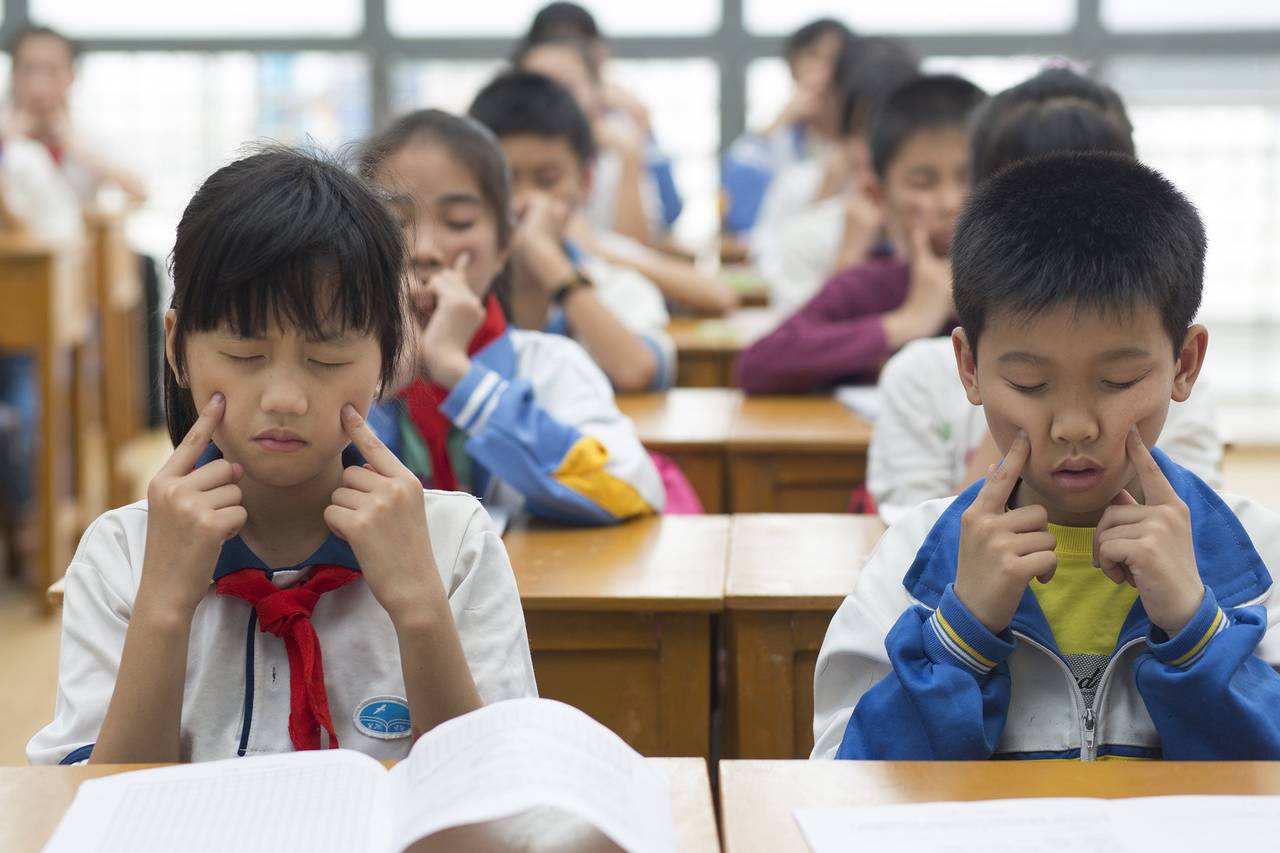 Children in this small southern Chinese city sit and recite their vocabulary words in an experimental cube of a classroom built with translucent walls and ceilings. Sunlight lights up the room from all directions.

The goal of this unusual learning space: to test whether natural, bright light can help prevent nearsightedness, a problem for growing numbers of children, especially in Asia.

With nearsightedness, the eye grows longer, so light doesn’t focus the retina as it should, making more distant objects appear blurry.

In the U.S., the rate of nearsightedness in people 12 to 54 years old increased by nearly two-thirds between studies nearly three decades apart ending in 2004, to an estimated 41.6%, according to a National Eye Institute study.

In several Asian countries, myopia rates in young people are far higher. A full 80% of 4,798 Beijing teenagers tested as nearsighted in a study published in the journal PLOS One in March. Similar numbers plague teens in Singapore and Taiwan. In one 2012 survey in Seoul, nearly all of the 24,000 teenage males surveyed were nearsighted.

Students in the classroom do eye exercises to help combat myopia. Photo: THEODORE KAYE FOR THE WALL STREET JOURNAL

Wei Wang, a professor of public health at Edith Cowan University near Perth, Australia, and one of the authors on the recent Beijing study, says genes combine with one’s behavior and environment to cause myopia. However, the fast increase must be due to environmental influences, since genes don’t change that quickly, he says.

The World Health Organization helped convened a group of international experts early this year that will review evidence and data on prevention and control of severe myopia. It will release recommendations as soon as this summer, says Silvio Mariotti, senior medical officer and an ophthalmologist at the WHO’s Prevention of Blindness program.

The greatest health concern is the increase in severe myopia, which increases the risk of serious eye problems like retinal detachment, glaucoma and macular degeneration, experts say.

Across Asia, doctors, parents and public-health officials are trying to prevent nearsightedness or keep it from worsening. Some methods are widely used but show little or no evidence of influencing nearsightedness. Those include acupressure-type eye massage based on traditional Chinese principles performed daily by many schoolchildren in China.

Other prevention efforts hold more promise. One main strategy being tested is to spend more time outdoors. The other involves a common drug named atropine.

Why myopia rates have soared isn’t entirely clear, but one factor that keeps cropping up in research is how much time children spend outdoors. The longer they’re outside, the less likely they are to become nearsighted, according to more than a dozen studies in various countries world-wide.

One preliminary study of 2,000 children under review for publication showed a 23% reduction in myopia in the group of Chinese children who spent an additional 40 minutes more outside each day, according to Ian Morgan, one of the researchers involved in the study and a retired professor at Australian National University in Canberra. (He still conducts research with Sun Yat-sen University in the Chinese city of Guangzhou.)

Outside the context of the study, it can be a challenge to get children to spend more time outdoors because of the heavy school workload and cultural beliefs about napping after lunch and tanning, Dr. Morgan says.

Not all studies looking at outdoor time have shown a difference in myopia rates. Some eye experts say that other factors, like extensive time spent doing what’s called near work, like homework and reading, also likely contribute to the growth in nearsightedness.

Ian Morgan, an Australian researcher, talks with students outside the classroom. Photo: THEODORE KAYE FOR THE WALL STREET JOURNAL

Dr. Morgan’s theory, which is supported by some animal research, is that light in the eye hits a neurotransmitter called dopamine, which releases chemicals that prevent the growth of the eye that can lead to myopia.

Dr. Morgan, Dr. Congdon and a team from Sun Yat-sen are now testing, as reported recently in the science magazine Nature, a so-called bright-light classroom made of translucent plastic walls in Yangjiang to see if the children can focus and sit comfortably in the classroom. So far it appears the answer is yes.

Sui Weixuan, 12, says the room at Yanxi Experimental Primary School, which seats about 50 students, is hotter than their traditional classroom. But she likes it better because it has better light. Many classmates echoed those sentiments.

Weixuan believes her eyesight deteriorated because she was watching TV and using the computer too much. “My parents told me, but I couldn’t control it,” says the petite girl with a wide smile and oval, black frames. Since she got glasses, she’s afraid of going blind one day and has curbed her TV-watching to one hour a week from three to four hours.

The research team hopes to start rotating children into the classroom for several hours each day starting this fall, Dr. Morgan says.

Eye doctors in parts of Asia already commonly recommend that children get outside more. But it can be surprisingly hard to get families to cooperate, some say.

A chart shows eye exercises, a common fixture in classrooms all over China. Photo: THEODORE KAYE FOR THE WALL STREET JOURNAL

Jason Yam, an ophthalmologist and professor at the Chinese University of Hong Kong, says it’s the first piece of advice he gives parents who bring in their nearsighted children. “The parents say yes, but they don’t do it,” he says.

Usually they come back and say their children didn’t have time to go outside because of homework. However, when he brings up another prevention strategy—using daily atropine eye drops—parents are very committed, Dr. Yam says.

Atropine, a drug used for decades to dilate the pupils, appears to slow the progression of myopia once it has started, according to several randomized, controlled trials. But used daily at the typical concentration of 1%, there are side effects, most notably sensitivity to light, as well as difficulty focusing on up-close images.

In recent years, studies in Singapore and Taiwan found that a lower dose of atropine reduces myopia progression by 50% to 60% in children without those side effects, says Donald Tan, professor of ophthalmology at the Singapore National Eye Centre. He has spearheaded many of the studies. Large-scale trials on low-dose atropine are expected to start soon in Japan and in Europe, he says.

Researchers are unsure how long children should use the eye drops for maximum effect. So far, the longest study has followed children for five years. In Singapore, children typically receive drops for three to six months at the first sign they’re becoming nearsighted. If their myopia continues to progress, they typically continue the drops for up to a year, Dr. Tan says.

Students at work in an experimental “bright classroom,” built to increase the students’ exposure to sunlight, in Yangxi city, Guangdong, China. Photo: Theodore Kaye for The Wall Street Journal

Other doctors say that because the side effects are minimal, children should continue using low-dose atropine drops until major eye growth is over, usually around the time of puberty. Dr. Tan says that exposure to the drops should be limited, as with any medication, to as short a period as possible.

Spending time outdoors is a low-risk solution, so the strategy can be applied broadly to children, says Karla Zadnik, dean of the Ohio State University College of Optometry. “Because more light is almost like fluoride in the water, it’s being applied to children without regard for their individual risk of myopia,” Dr. Zadnik, who has been studying myopia for 25 years, wrote in an email.

But more invasive or expensive treatments mean that children should first be assessed for their risk for developing nearsightedness before trying them, she says.